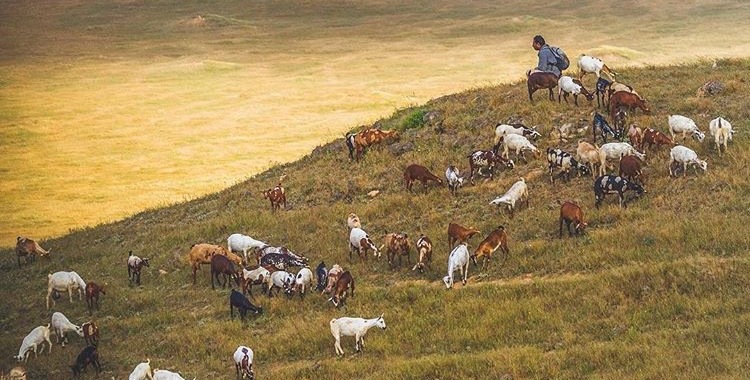 After camels, cows are the most important herd animal. Cow owners will argue that they are more useful than camels because they produce more milk and have more babies. They are also said to have sweeter temperaments, but that is an argument I am not getting into, nor will I discuss which animal is smarter.

Cows are usually kept in at night, especially calves, and let out to graze freely in the day like camels. Cows roaming free are a rarity on the Arabian Peninsula, so Gulf Arab tourists often stop to take photos of them as an exotic creature. During the khareef (monsoon season, June – August) they stay in the mountains but are usually kept in during the day, because of the numerous flies, and let out to graze at night. Owners will sometimes lit smoky fires to help get rid of flies.

The local type are small (shoulder-height), often with great curving horns, and are usually placid. In the mid- and late-1970s, new breeds were brought in to increase size and milk output [see Andrew Higgins (2011) and Janzen (1986)].

Like camels, cows stick together in groups and walk in line along the sides of roads but unlike camels, cows will often lie down or stand in the middle of roads as dark tarmac roads hold the warmth of the day.

Cows and camels don’t get along well and you seldom see them feeding near each other and very rarely intermixed in the same area. Most people have one or the other, a division which is partially based on tribes or family-clans within tribes. Some tribes are known for having a preference for one or the other; friends who have different animals will occasionally argue about the relative intelligence/ worth/ temperament of the two types of animals.

As with camels, cows are usually milked by men but a woman can do it if there are no men around. Cow’s milk is often turned into samn (clarified butter) which is kept in an urn-shaped metal container. This is seen as more valuable than milk and in the past was a primary exchange item in a system of barter with townsfolk.

The same customs for herding camels obtains for cows; either a man or an expat supervised by a local man will be responsible for a herd of around 20 to 50 cows which might be all owned by one person or several family members.

The third most important herd animal is the goat. Goats don’t have the prestige of cows or camels but are also named and looked after carefully. They are herded by Dhofari women or men, or an expat laborer. A herder usually stays with the goats all day. Both men and women milk goats.

Families in town will sometimes buy a goat and keep it in the yard of their house for a few hours or days, especially before the two Eids. I was reading in my garden one evening and felt something tugging and chewing on my shirt. I looked down to find two goats snacking on my L.L. Bean oxford. Turns out my neighbor had bought three goats to fatten up for the Eid. He let them out of his garden every day at 5 pm to let them forage and they would come over and snack on my flowers.

Goats with herder (from social media) 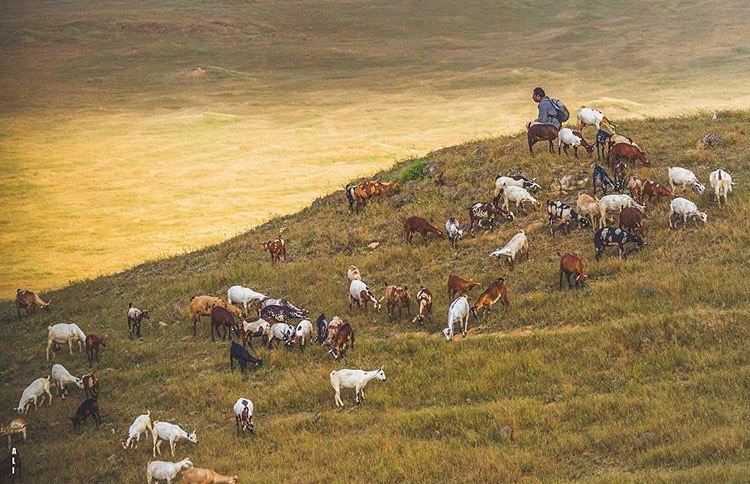 Cows on the road!