One aspect of living in Dhofar that can be hard to explain is that people are often judged on the intention, not on the rightness (or wrongness) of the action. I have been the happy recipient of this characteristic as I muddle along trying to do what is appropriate.

A few days into Ramadan my doorbell rang about half an hour before the maghreb (sunset) call to prayer which ends the day’s fast. It was an Omani neighbor who had moved in a few months before. We had waved ‘hello’ but didn’t know each other. He had set a covered paper plate, a small packet of dates and a small packet of figs down on the table next to my front door. I smiled and said, “thank you! Ramadan kareem.” He waved at me and walked back down the stairs.

The plate had 2 pieces of grilled bread with cheese, 2 quarters of a toasted sandwich with sliced hotdogs and cheese, 2 samosas with a hash of meat and potatoes and 3 spicy, breaded, fried mashed-potato rounds. YUM! Neighbors, relatives and friends often give each other plates of prepared food for Iftar, the meal at sunset that breaks the fast. This was a kind gesture and the way it was packaged meant there was no dishes that I had to return.

I knew I should reciprocate, but not the next day (which could lead to a ‘food war’). In Dhofar, with family and close friends, it doesn’t matter if or when you give a return gift, but for people you don’t know well, it’s best to wait a few days and keep the energy causal, not frantically trying to quickly repay.

So I waited a few days and then started to think what I should give. First, I should not give something that I had made as there is often a worry that I might have accidentally added something haram (forbidden). Second, I decided to give items that would keep for a few hours, so if the family already had a plan for Iftar, what I gave could be kept for a later meal or suhoor, the meal eaten before dawn.

As only a husband, wife and small child lived in the house, I went to a well-known Lebanese restaurant and bought a plate of falafels with cut tomatoes, lettuce and pickles, a container of hummus, a container of tabouli, two packets of fresh Lebanese bread and a plate of mixed, fried sweets.

Then, I went to the front of their house and was surprised to see two doorbells on the outside gate, and a low wall dividing the interior courtyard. Because of the relative position of our houses, I had only seen one side of the house, with the kitchen door through which I had seen the three occupants enter and leave. But two doorbells meant the house was subdivided, probably two close relatives and their families, which meant they would be having Iftar together and my food gift was going to be wildly inadequate.

Which is what happened. The people I knew didn’t answer, but a woman from the other side of the house opened a window and as I tried to explain what I was doing there, she said that the woman who I knew was her sister. So I handed over the bags, feeling rather stupid, and went home. Then I realized that I had mis-read the time. It wasn’t 40 minutes to Iftar (a time when most people are up and awake); it was 1 hour and 40 minutes to Iftar, often a time for napping.

But the normal Dhofari kindness won through and about five days later, my neighbor stopped by again with a plate of pakoras, vegetable samosas, triangles of tuna salad on white bread and arays [Lebanese bread sliced open, spread with spiced meat (kafta), grilled flat and cut into triangles]. And their Eid present from me? A very large box of chocolates!

My favorite Ramadan treat is triangle cheese samosas: the perfect food. Delicious hot or cold and they pair with condiments from any culture: cranberry sauce, mango chutney, onion marmalade, or coconut/ green chili sauce. They are only sold in Ramadan, usually from a road-side stand set up in front of a bakery about two or three hours before the maghreb (sunset) call to prayer, earlier now because of the curfew.

These samosas are a good example of food can get connected and unconnected to religious holidays. I wonder if there are Omanis in the States who mark Christmas time by the arrival of peppermint-mocha coffees or Omanis in the UK who mark Easter by the appearance of Cadbury eggs.

The samosas are also an example of how foods which represent cultures can be very idiosyncratic. “Amazing Italian food” to me doesn’t mean pasta, it means the little stands with a cascading fountain of cool water with small pieces of fresh coconut that I first saw in Florence when I was a teenager. It seemed to me the most perfect snack and I begged my father for cash to buy pieces every time I saw one.

“German food” makes me think of my absolute terror of ordering bread in a German bakery when I lived there. Counter-people and other customers expected you to have your order ready and be able to answer the quick, sharp questions hurled at you. Hesitation or confusion resulted in many baleful glances. I would stand outside and practice saying my order to myself for a few moments before I ventured into bakeries.

(photo of a family Iftar by an informant, shared with permission to use on this website) 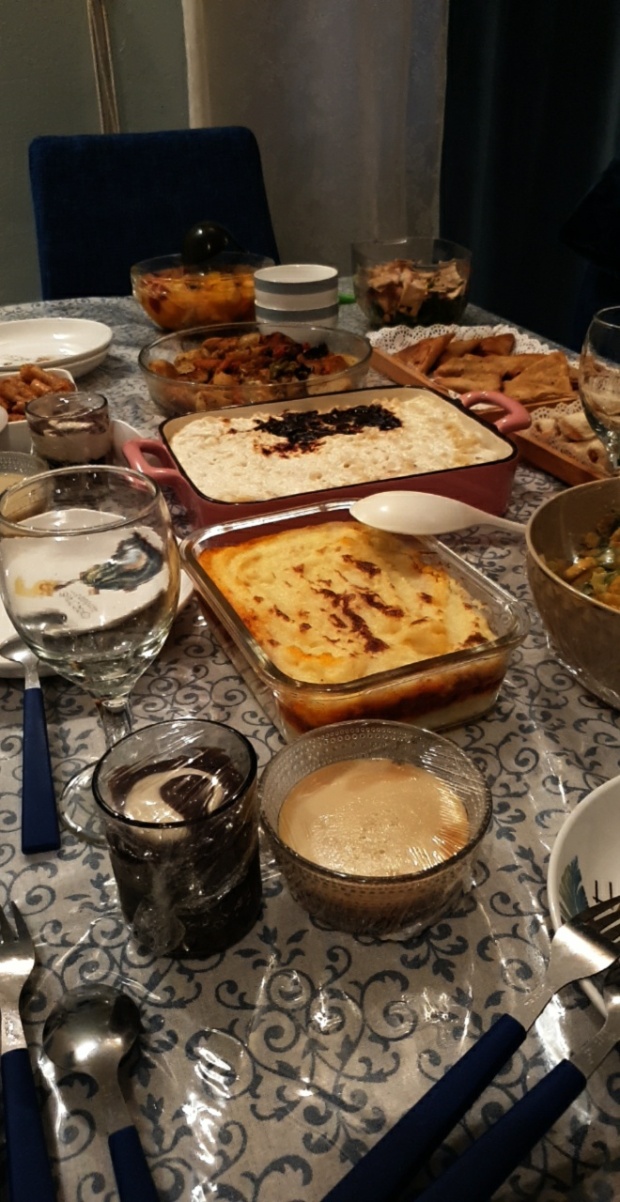 an interesting ad campaign about not wasting food during Ramadan