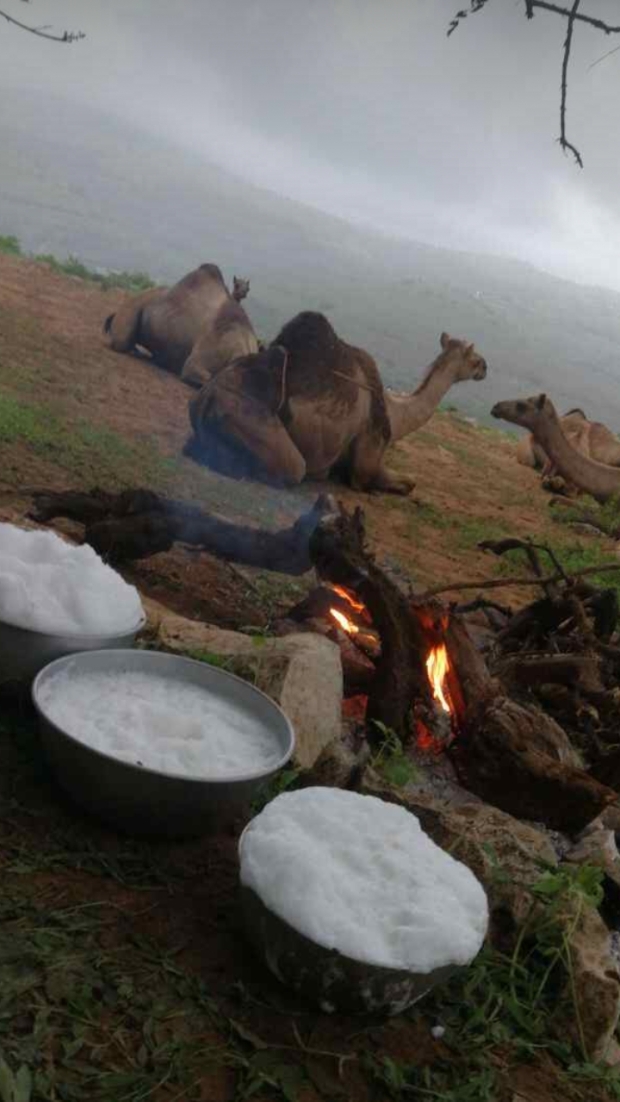 Pragmatics of When and What to Eat

Breakfast is usually a light meal. The timing varies from after the dawn (fajr) prayer to 11am on weekends and holidays. Almost everyone drinks tea, either plain, with a lot of sugar, with milk and/ or spices. In houses, thermoses are made by or under the direction of senior women and set out throughout the day. Some Gibalis simply have tea or tea with toast (sliced bread from a loaf); pita bread (called khbus lebnani) with butter, jam, honey and/ or processed cheese; round, thick traditional bread (called variously tanoor or kak in Arabic or godom or thakin in Gibali); store bought biscuits; a parata (plain or with dal or eggs inside) bought from a small, road-side restaurant or brought to the office by the “tea-assistant.” Eggs (scrambled, fried or boiled) are often set out and children often eat cereal and sometimes pancakes.

Lunch is the main meal of the day and eaten around 1:30 or 2pm after kids return from school and adults return from work. In almost every Gibali household rice must be served.[i] The rice might be plain white and served with dates and fried or grilled fish; biryani with fish, meat or chicken placed on top; a “curry”; a salona; or one of the dishes seen as traditional including qabooli, kebsa, maqboos, and mandi.[ii] The main dish is served with one or more condiments called “chutney” and a chopped salad, often made with fresh vegetables such as onions, cucumbers, tomatoes, carrots, green peppers and, sometimes, lettuce; this is served without a dressing.[iii] Quartered limes and small plates of chili peppers are often set out; some families use bottled hot sauces such as Tabasco.

When the Gibali men I know say “lunch” they mean “rice with meat or fish.” There is no other definition. Although they will sometimes eat chicken, older Gibali men will usually not. More than one male Gibali friend told me that his father had never tasted chicken in his life; this is mentioned in Thomas (1929 103).

Dinner is more varied. It is eaten between 7pm and 11pm, or even later while camping or at large formal parties. There might be rice and meat, chicken or fish again, but also dishes such as potatoes and eggplants sliced thin and baked in tomato sauce; macaroni or spaghetti mixed with tomatoes and fish (usually tuna), meat, or chicken; macaroni or spaghetti with a béchamel sauce. There is usually a chopped salad, chutney, hot sauce and sometimes yogurt.

[i] As Al-Hamad (2016) states, “The Arabic for rice is riz/ruz, but in the Gulf it is ‘aish,” the Arabic word for living or life. In other countries such as Egypt, bread is called ‘aish but in Oman, rice is the most important staple.

[ii] “Curry” is used locally to mean a stew or vegetables and meat, chicken or fish, not necessarily made with curry powder, which is poured onto a platter to be eaten by being scooped up with bread. Salona is usually locally to mean a thin soup with chicken, meat or fish, usually with purred tomatoes as a base which makes it dark red. It is served in bowls or tin-foil containers. People either simply dip bread in the soup or position bread between thumb and two forefingers and, using a pincher action, tear off a piece of meat. Qabooli, kebsa, maqboos, and mandi are considered traditional, local rice dishes in several Middle Eastern countries. It is beyond the scope of this paper to adjudicate origin, ingredients or recipes.

[iii] “Chutney” is not the same as chutney from India which is usually cooked with fruit. It is a condiment whose exact composition varies from family to family but usually made from blended spices with uncooked vegetables. A common one is made from pureed tomatoes, onions and spices and is similar to salsa. A more traditional one is made from pureed garlic and ginger with vinegar. When I showed several Gibali men a small dish of Indian-style mango chutney and asked “Is this chutney?” all of them said no.